In November 2017 we reported on the devastating fire which ripped through the Badjao Village on the island of Palawan in the Philippines; you can read that report here.

Just 4 months later we can report the good news that new accommodation has been built and some families are moving in. The families allocated the 18 brand new homes so far available have been carefully chosen as those most in need, mainly newlyweds with young children with nowhere to build their own homes. 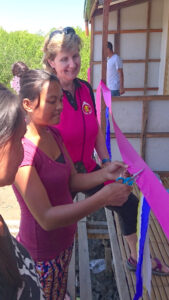 emony of dedication included officially handing over the keys and cutting ribbons for each house. One special thrill of the day was joining Wisma in cutting the ribbon to her new home. Wisma was the first Badjao the team met, in 2008, when she was the area’s answer to the Artful Dodger  – begging, borrowing and who knows what else with her group of street urchins.
Ten years on, she has been married twice, abandoned and divorced and most recently widowed; and all by the tender age of 22. So being able to provide a good home to Wisma and her two small children gave us immense joy.

Next door to Wisma is Mustafa, one of a group of more than twenty Badjao youngsters the team have worked closely with during the past nine years. He amazed us during our weekly street club by sharing a vivid dream he had seen the night before. 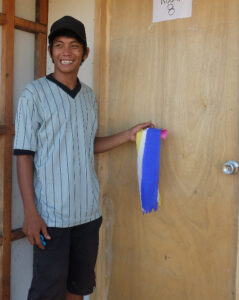 “Please pray for me,” he urged, “I’m very frightened. A blazing white figure so bright I could not look at it walked in my dreams last night. He told me his name was Jesus and that I must follow him.”

We hope this new season will be the opportunity for Mustafa and many others to find faith in Jesus and joy in following him.

You can find out more about the work of the Father’s Refuge here: http://www.palawanrescue.org/

Tomorrow Sunday Worship Gathering
March 2 Jubilee Keep Fit
We are using cookies to improve your experience on this site. You can ready more about them along with our Privacy Policy here.